Currently, there are no counties or cities in Florida that act as “sanctuaries” for undocumented immigrants.

TALLAHASSEE — The long-shot efforts by Florida Republicans to ban so-called sanctuary cities in the state may have a better chance this year, as key GOP lawmakers align to push legislation that Gov. Ron DeSantis has promised to sign into state law.

At the center of the current effort is Sen. Joe Gruters, the chairman of the Republican Party of Florida, who has made prohibiting local governments from acting as “sanctuaries” for undocumented immigrants a priority this legislative session.

Critics of the bill argue efforts to outlaw “sanctuary cities” have more to do with partisanship than with thwarting an existing problem. Currently, there are no counties or cities in Florida that act as “sanctuaries” for undocumented immigrants.

But as immigration policies fuel political division in the nation, Gruters is trying to marshal support in the state Senate, where similar proposals have died in recent years.

Gruters said he intends to push the same language included in a similar House proposal he co-sponsored last year. His current bill (SB 168) is set for a hearing Monday in the Senate Judiciary Committee, the first of three committee stops.

Sen. Jose Javier Rodriguez, a Miami Democrat who serves as the committee’s vice-chairman, said the chances of the proposal doing better this year are “obviously high,” considering Gruters’ prominent position as the head of the statewide GOP party.

“I think everybody understands that this is a campaign promise,” Rodriguez said in an interview. “They are trying to convince part of their base that they are tough against undocumented immigrants even though there is no such thing as a sanctuary city in Florida.”

While Gruters does not set the agenda for the Republican Party, his goal as party chairman is to win races in the future. With 2020 on the horizon, and President Donald Trump making immigration the cornerstone of his campaign, a hard-line immigration proposal passed by the Republican-controlled Legislature could provide a good selling point to voters.

Senate President Bill Galvano, R-Bradenton, said he believes the “sanctuary city” ban should be vetted but added the proposal is not a personal priority of his.

Under the proposed bill, police would be required to honor all requests made by U.S. Immigration and Customs Enforcement to hold undocumented immigrants, even though judges have repeatedly ruled such holds violate a person’s constitutional rights.

The bill would also allow the governor to remove an elected official from office if they cast a vote in favor of a “sanctuary city” policy.

DeSantis, a Republican who is close to Trump, has been clear that he does not want to allow “sanctuary cities” in the state. During his inauguration speech in January, he told Floridians the state would “stand for the rule of law.”

“We will stop incentivizing illegal immigration, which is unfair to our legal immigrants, promotes lawlessness and reduces wages for our blue collar workers,” DeSantis said.

But it remains to be seen if the controversial bill will again be hard to swallow for some in the Florida Senate who either ideologically opposed the bill or were not in favor of sanctions. Gruters said it is his intention to keep the sanctions in the bill.

Galvano has encouraged Senate Judiciary Chairman David Simmons, R-Altamonte Springs, to work with Gruters to address concerns state senators have had in the past.

Due to term limits, García no longer serves in the Senate. But Flores is a member of the Senate Rules Committee, which could be the last Senate stop for the bill before a full floor vote. 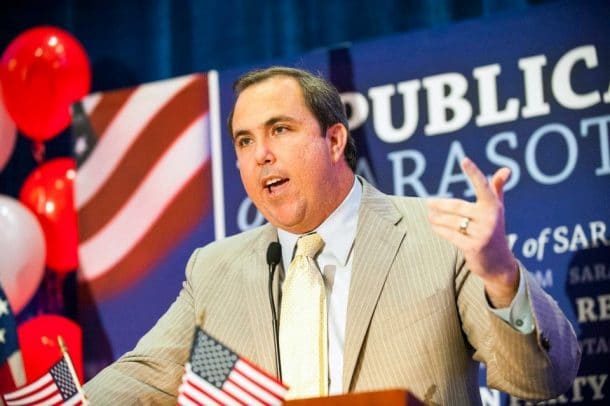